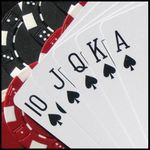 Poker is played with the standard deck of 52-cards, and sometimes jokers are added as wild cards. The object of the game is to win the pot which contains all the bets the players have made in a deal. Usually played by 3 to 7, but sometimes more or fewer, players are dealt cards which are usually reduced to a Poker hand of five (5) cards. Betting and bluffing are used in rounds until all bets are squared up, or until all other players have conceded the pot (folded). If all bets have been squared up, the rounds are followed by a "showdown" in which all hands are fully revealed; the one with the best combination of a Poker hand of five (5) cards being the winner.

The following table describes and ranks the standard Poker hands: