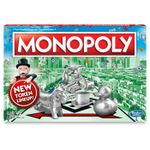 The classic real estate game. Buy properties, build houses and hotels, collect rent from fellow players. Repeat as necessary until everyone else is bankrupt.

Monopoly was patented in 1935 by Charles Darrow and released by Parker Brothers. The game was actually one of a number of variants in existence at the time, all of which date back to an earlier, 1904 game by Elizabeth J. Magie, called The Landlord's Game. Her name is pronounced [MAG ee]. It's worth pronouncing correctly the name of the creative mind behind the most successful proprietary game of all time. Magie was a proponent of the Single Tax put forth by famous author Henry George. The game was designed to show how the Single Tax would work - players could choose to play under regular rules or alternate "Single Tax" rules.

The game didn't really go anywhere and Magie lost interest in it. Variations of the game evolved, however, and homemade versions traveled up and down the Atlantic coast and even as far west as Michigan and Texas, being developed all along the way. Eventually the game was noticed by Charles Darrow who introduced it to the world in its current form.