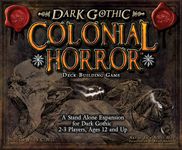 Description from the publisher:

Dark Gothic: Colonial Horror can be combined with the original Dark Gothic deck-building card game to add new mechanisms and greater variety to it, or it can be played on its own as a 2-3 player game that is fast, fun, and deadly!

In Dark Gothic: Colonial Horror, each player takes on the role of a unique monster-hunting hero who collects allies and gear to aid them in their journeys while they root out evil and hunt supernatural creatures back to their lairs. Players must hunt down a series of increasingly difficult villains that are terrorizing the countryside before the land is consumed in shadows. Though the heroes must generally work cooperatively as a group to stop the villains from overwhelming the land, there can be only one top monster hunter amongst them when the dust clears and the final victory total is gathered.