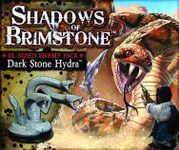 Not all creatures that stalk the canyons and mines around Brimstone are from an OtherWorld. When the resonating horde of Dark Stone blew Brimstone off the map, it released waves of Void energy across the land, tainting the earth and mutating man and beast alike! The Dark Stone Hydra is one such creation; a common rattlesnake, found throughout the deserts of the Southwest, grown massive by the twisting powers of the Dark Stone! With multiple hissing heads, spiked Dark Stone shards protruding from its body, and a brutal Dark Stone rattle, these savage beasts are a terror beyond imagining, made all the more frightening by their common appearance throughout the region.

The Dark Stone Hydra is a gigantic and terrifying beast! It is not only massive, but also fast and deadly as it strikes, slithering between models to change targets and snapping with all of its fanged heads! The Dark Stone Radiation that taints this creature also exudes from its body, corrupting those that stray too close, and its ability to regenerate damage offsets the fact that it loses power as you cut off its heads. This Enemy Pack contains everything you need to add the savagely giant Dark Stone Hydra to your games of Shadows of Brimstone! A high detail plastic model of the Dark Stone Hydra is included, as well as the rules and cards needed to add it to your games.