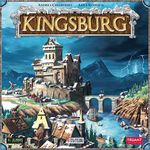 In Kingsburg, players are Lords sent from the King to administer frontier territories.

The game takes place over five years, a total of 20 turns. In every year, there are 3 production seasons for collecting resources, building structures, and training troops. Every fourth turn is the winter, in which all the players must fight an invading army. Each player must face the invaders, so this is not a cooperative game.

The resources to build structures and train troops are collected by influencing the advisers in the King's Council. Players place their influence dice on members of the Council. The player with the lowest influence dice sum will be the first one to choose where to spend his/her influence; this acts as a way of balancing poor dice rolling. Even with a very unlucky roll, a clever player can still come out from the Council with a good number of resources and/or soldiers.

Each adviser on the King's Council will award different resources or allocate soldiers, victory points, and other advantages to the player who was able to influence him/her for the current turn.

At the end of five years, the player who best developed his assigned territory and most pleased the King through the Council is the winner.

Many alternate strategies are possible to win: will you go for the military way, disregarding economic and prestige buildings, or will you aim to complete the big Cathedral to please the King? Will you use the Merchant's Guild to gain more influence in the Council, or will you go for balanced development?

Kingsburg: To Forge a Realm

While dice are heavily used in this game, this is not your typical dice game. Each player is governor of a realm of the kingdom, each trying to build the the better castle. The game is divided into 5 years, with 4 seasons each year. During three of the seasons the players are able to gain resources and build on their castle; during winter each player is attacked by a monster which can either harm the player or give the player a reward, depending on failure or success. During each productive season all the players simultaneously roll their dice, then progressing from the lowest total to the highest each player may spend their dice to gain resources. There are 18 advisors on the board numbered 1-18 and the dice are used to determine which advisors you can use. For instance,f you rolled a 3-4-5 then you could use advisors 3, 4, and 5, or 7 and 5, or 3 and 9, or number 12. Once an advisor has been claimed for that season, no other player may use them.

After gaining resources players may then spend them to build; each building offers a bonus to the player, and each player has the same choices. The buildings are arranged in a grid on a player mat, and you have to build left to right (columns) but you can pick which rows. Most buildings award victory points, although points are awarded for fighting off the monsters as well.

The game has a fair amount of luck involved regarding what numbers show up on the dice, however deciding what to do with your dice is a large part of the strategy behind the game. It is light-to-medium as far as strategy is concerned, but it is far from a luck-determined game.