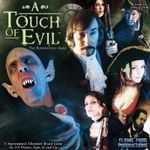 A Touch of Evil, The Supernatural Game

Tis’ the dawn of the 19th century; an age of science, superstition, and witchcraft. Howling fills the night as a full moon rises over the small, secluded village of Shadowbrook. Gruesome murders have become a daily occurrence and terror haunts the streets at night. An evil creature has taken up residence here and the countryside is engulfed by a tide of darkness. But all is not lost…not yet.

A small group of heroic individuals, with the courage and strength to fight, have arrived in town. Some just passing through while others have come with a purpose; but all will be put to the test as they race to save this cursed town from falling into darkness. It will take a cunning mind and strength of spirit to determine who is friend and who is foe… to solve the mysteries and hunt the beast to its lair.

But the secrets of Shadowbrook run deep. Gossip and rumors run rampant and these few Heroes may soon discover that they are outsiders here and this town is already so rotten from within there is little left to save.

A Touch of Evil, The Supernatural Game is a fast-paced game of fiendish creatures, dashing Heroes, and high-adventure. Each player takes on the role of a unique monster-hunting Hero, racing against time to stop the forces of darkness from claiming another foothold in the world of man. Only by investigating the town and building your Hero’s strength can you hope to hunt down the Supernatural Villain to his Lair and defeat him in an epic Showdown. Players can race Competitively to be the first to defeat the Villain and save the town, or they can work together Cooperatively to defeat a much stronger Villain.

Featuring a gameboard map of Shadowbrook and its surrounding countryside, eight Heroes to choose from, and four different Supernatural Villains to hunt; each with its own host of unique Minions and powers to drastically change the game. A Touch of Evil is designed to create an adventurous cinematic feel as the story and game unfolds.

So grab up your Wooden Stake, stuff some shot in that Musket, and hold onto your Tri-corn Hat; no one is safe from the creatures of the night and no one can be trusted…for inside everyone lies A Touch of Evil.

A Touch of Evil is a great game with an unfortunate name, as some will miss this gem of colonial gothic action investigation as your hero rescues the town of Shadowbrook from a menace. The game is highly thematic, even to the degree that if players opt not to read the flavor text on the cards the experience will be diminished. The game is more strategic than tactical as resolving conflicts usually involve rolling dice and counting 5s and 6s, and players spend most of their time moving around the board and having encounters in hopes of gaining clues, allies, or equipment to aid them in ridding the town of the Touch of Evil that is plaguing it.

During setup a villain will be chosen. Each villain has its own set of minions and special abilities which alter some aspect of the game. Each villain has a basic and advanced version of its stats allowing the players to decide how hard of a game they want to have. Additionally the players can decide to play with the co-op rules, the team rules, or the competitive rules. Players also get to choose which hero they are, each hero having different stats and different special abilities. During setup the players will shuffle a deck of secrets and the deck of Town Elders. Each Town Elder is dealt a secret, which is kept secret from the players until they spend their hard won clues to discover an Elder's secret. The secrets range from being helpful in fighting the villain, harmful in the fight, to actually being in league with the villain.

Each round all of the players will get a turn, after which a mystery phase occurs in which the villain heals, KO's heroes revive, a card from the Mystery deck is drawn and is resolved, usually to the detriment of the players, and the first player marker moves. Each turn a player will roll a die to see how many spaces he can move on the board. Should a player move into a space with one of the villain's minions in it he will stop and fight. Finally players will take actions, in any order they wish, and as many as desired. Actions include encountering the current space, which usually means drawing a card from one of several decks, healing, pay to look at an Elder's secret, uncover where the villain's lair is, and start a showdown with the villain.

Individual turns resolve quickly, resulting in a game with little down time once players are familiar with the rules. Considering each player and each villain adjusts the rules, and that many of the cards in the game will impact how players will decide to play, the first few plays will take time; however, once slight learning curve is mastered the game flows smoothly. Thematically it feels as if players are in the world of Washington Irving's Sleepy Hollow; indeed the game even has a headless "Spectral Horseman." Players are essentially building up an arsenal to take down the villain and become the hero of Shadowbrook. The game is not a high strategy game, rather it is a game that will allow you and your fellow players to tell the story of how the town of Shadowbrook was rescued from A Touch of Evil.