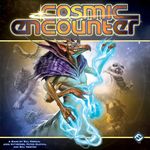 In Cosmic Encounter, each player is the leader of an alien race. The object of the game is to establish colonies in other players' planetary systems. Players take turns trying to establish colonies. The winner(s) are the first player(s) to have five colonies on any planets outside his or her home system. A player does not need to have colonies in all of the systems, just colonies on five planets outside his or her home system. These colonies may all be in one system or scattered over multiple systems. The players must use force, cunning, and diplomacy to ensure their victory.

This is an updated version of the original Cosmic Encounter from 1977.