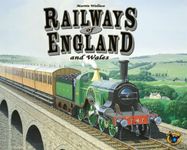 Railways of England and Wales

Who will become the first Rail Baron of England?
Mid-19th century England... the tramways that first appeared to transport coal have since been upgraded to railways. Numerous different companies using different railway gauges connected to villages, towns and cities across the country. Eventually the small companies were merged into the Big Four.
This new expansion has two sets of rules. The first set of rules follows the gameplay of the Railways of the World series. The second set of rules is a brand new game from Martin Wallace that features a new share system and economic engine that builds upon the Railways of the World engine.