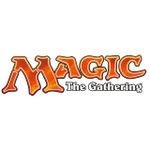 This is the grandfather of the collectible card game (or CCG) genre. Players build a deck of cards and duel against an opponent's deck. The first player to reduce his opponent to 0 life (or meet another set win condition) wins the game. There are over ten thousand different cards from which to build your deck.

Though traditionally a two-player duel, there are several casual and tournament formats to Magic that allow more players to play.