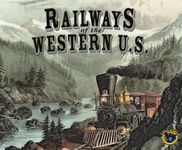 Railways of the Western U.S.

Railways of the Western U.S. is an expansion for Railways of the World. Designed by Rick Holzgrafe, this expansion map uses pieces, tiles, money, trains, bonds and rules of the original game, but comes with a new map, featuring the Western half of the United States. The basic mechanics and gameplay of the original game are unchanged, as players build track and deliver goods to increase their income and earn points, but several other mechanics have been added.

Scheduled to be released in the first quarter of 2011, and being presented at game conventions by the designer for play-testing.