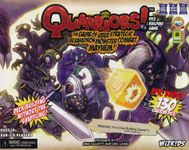 Players take on the roles of Quarriors - mighty mystical warriors who have the power to capture dangerous quarry from the untamed Wilds! They must conjure the mysterious powers of Quiddity, cast powerful spells, and summon their creatures to battle if they hope to overcome rivals and earn their rightful place as the Champion!

Quarriors has the frenetic excitement of a dice battle game, with an added ‘deckbuilding’ twist: players customize their dice pools during the game using resources generated by their rolls.

Quarriors takes the best of deckbuilding games without the tedium of shuffling. Take a typical deckbuilding game, add the speed and fun of dice and in 60 minutes you’re on your second or third game trying unique strategies against your opponents.

In Quarriors, each player plays as a Quarrior competing for Glory in the eyes of Quiana, the Empress of Quaridia. Each player starts with an identical set of 12 dice in their dice bag. At the start of the game, Creature and Spell dice (Quarry) are dealt at random to form "the Wilds" in the center of the table. As play progresses, players roll their dice to attempt to summon Creatures, cast Spells, and harness the magical power of Quiddity (the in-game resource) to capture Quarry from the Wilds to add to their repertoire and into their dice bag. Players draw and roll 6 dice a turn from their bag, making that controlling bag composition is key to victory.

Quarriors is a fast-paced game where players must strategically balance their choices each turn. Do I use my Quiddity to summon Creatures in the hopes of scoring Glory or should I spend it all to capture more powerful Quarry from the Wilds? Players must outmaneuver their opponent's through strategic Spell use, the acquisition of powerful Quarry, and ultimately, by striking down opponent's Creature in combat. If your Creatures survive until your next turn, you will score Glory points and move closer to victory!

Quarriors! is a game of rolling dice in order to ready creatures for glory, smiting your fellow player's creatures, and recruiting more creatures into your fold. Taking inspiration from the deck building genre, each player starts the game with an identical bag of 12 dice. On his turn a player will score glory for any creature he still has in play from his previous turn, then he will randomly draw 6 dice from his bag and roll them. Each die belongs to a set of dice, easily identified by color, and each set of dice has a corresponding card in the play area describing what each face of the die means. A die is either a spell, a creature, or currency. After rolling the dice players have to decide which creatures they rolled they will ready; they can only ready creatures they can pay for out of the currency rolled. All creatures the player readied will now attack every other player; each player will defend the attack with their readied creatures; some will perish defending their player, and thus will not score. Finally, the player may recruit one die from the common area with any remaining currency. Play continues until one player accumulates the necessary glory to win the game!

Quarriors! has a higher luck quotient than its deck building cousins, and the game's combat mechanics are straightforwardly ruthless: you cannot play favorites, nor can you be merciful, you will attack everyone. The greatest conscious tension in the game is deciding what to do with your rolled dice, as readying a creature will diminish your ability to recruit another creature. Some creatures are cheap to ready, won't survive most attacks, and score few points, while other creatures cost a premium but will score a handful of points. The strategy of the game lies in curating the dice in your bag as well as making the best of every situation.

Each game only sees a few sets of dice brought out to play with, the others saved for a future game. Additionally, each set of dice has more than one card describing its abilities, so future games with the same dice will not always grant the same power, offering a wide array of replay options. The game plays fast, with little in the way of down time and setup time. It is heavier on luck than deck building games: you know what dice you will roll, so you know your chances, but you don't know what you will roll. You may, or may not, get that creature you were hoping for. This can be both a good and a bad thing, for it levels the playing field allowing a less skilled player to still have a chance to win the game, but a highly skilled player can still lose with a few bad throws of the dice. Because of this the game should be played in accordance with the theme: have fun, take it lightly, enjoy yourself, and play for the social interaction.