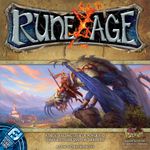 An age of innovation and discovery is at hand. With war on the horizon and whisperings of a prophetic storm approaching, now is the time to gather all your strength and set out to forge your place in Terrinoth's book of legends!

Rune Age is a deck-building game of adventure and conquest for 2-4 players. Set in the fantasy realm of Terrinoth (Runebound, Descent: Journeys in the Dark, Runewars, and DungeonQuest), Rune Age puts players in control of one of four races, vying for dominance in a world embroiled in conflict.

Designed by Corey Konieczka, Rune Age is a unique deck-building game that centers around scenarios. The four different scenarios included in Rune Age present alternate win conditions for players, from an all-out war to determine the victor to a cooperative game experience where players all win or lose together. Scenarios not only dictate the win conditions, they also determine which card types will populate Terrinoth (forming the central card pools) and which Event cards will form the Event deck. The Event deck contains thematic challenges, enemies, and happenings that are tied to the chosen scenario, creating a new play environment each turn.

Gameplay in Rune Age centers around players working to develop their individual deck of cards. At the beginning of the game, each player begins with a small assortment of cards in their deck, drawing five cards each turn to carry out their actions. Each player's deck represents their faction's military strength and capabilities. These decks will be formed with their faction-specific Unit cards and a central collection of Neutral Unit cards, Tactics cards, and Gold cards.

While players begin with limited cards in their deck, through cunning and strategic use of their available cards, players can expand their deck to create a destructive force of their own clever design. Will you create brutal deck of formidable Units? Or will you rely on Gold and Influence to acquire neutral forces and powerful Tactics?

Rune Age is an asymmetrical, scenario based, deck building game where the victory conditions change from last man standing to cooperating for a shared victory. Each game players will select a scenario, each scenario having an unique victory condition, an unique event deck, and a set of neutral cards. Each player will also select a faction to play as; each faction's unit cards are unique, and only that faction may draft those cards.

Players spend their turns performing actions. Players can spend their gold to draft their private units, or spend influence to draft neutral cards, gold cards, and to keep cards in their hand for the next turn. Players can also play their cards for the actions printed on them, or they can engage in a combat action, spending strength, either against a neutral city (which awards influence per turn), another opponent or against a comment enemy drawn from the event deck. When a player is done with his actions he must discard any remaining cards in his hand, unless he spent influence to keep them. Once the last player ends his turn an event from the event deck occurs. Play continues until the victory conditions on the objective card are met.

The asymmetry of Rune Age, while balanced, does force players to form their strategy based on the faction they are playing. By employing 3 resources (gold, influence, and strength) the game forces players to weigh and judge how they want to play the scenario. Gold is needed to draft more units, and units are needed for combat or influence, while influence is needed to manage your hand and purchase the neutral cards. Tension is further added by the effect of the events in the event deck, each one commanding attention from the players.

The four scenarios are radically different in their objective and event decks, which give players an immediate breadth of choice with regards to the type of game they will play in any given session. The main difference between scenarios is the level of player interaction, from virtually none, to an all out war of elimination. Each scenario does dictate which neutral cards are available, which can make repeat plays of the same scenario seem rather static. Nonetheless, the game feels dynamic and worth replaying as the combination of scenarios and factions add dimension to the game; however, this can work against the game in that some players may refuse to play a certain faction and/or scenario.